Now more than ever, mobile device users are conscious about significant advances in both device and OS security. Every time a new build of a mobile operating system is released, it includes a variety of new safety features. This time Google has taken a significant step forward with Google Play Protect.  Since it was launched before Android Oreo, users don’t have to wait for the new version to try Google Play Protect. 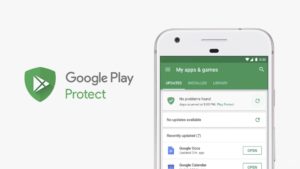 The best kind of security for a mobile device is that which is easy to use and demands no expertise.  Where users don’t have to first familiarise themselves with a series of Android Rooting Tutorials, simply to get them up and running.

That’s precisely what was promised (and perhaps delivered?) in the form of Google Play Protect.  It carries out a security scan on every app downloaded from Google’s Play Store. If it’s not already installed on your mobile device, enabling it and putting it to work is easy.  Just update the Google Play app. If your device is running Google Play app version 11 or higher then Google Play Protect is already working.

A new take on the old Google Play Protect brings together a series of security features, including Chrome Safe Browsing, lost phone tracking and locking etc.  One of the ‘new’ features that’s been attracting the most attention is Google Play Protect’s anti-malware functionality.  Google monitors apps using its machine learning platform to identify any unusual behaviour or activity. This is done to eliminate all traces of them from your device before any damage can be done.

Did this kind of functionality exist before?  In a word, yes.

It was in 2013 when antivirus capabilities first made their way into Android devices.  At the time, the system simply performed a scan during installation of mobile apps.  Later in 2014, a new model was introduced which brought continuous-scanning to the antivirus security feature.  The idea being that long after installation, suspicious behaviour (malicious module downloads, for example) could be detected and stopped.

Earlier all this happened in background without user’s intervention. This was why anti-malware applications, such as those from AVG or McAfee, are enormously popular among Android customers. They offered a visible or identifiable evidence of the job they were doing.  In some instances, to such an extent that they became intrusive and annoying – often causing unnecessary slowdowns in the process.

The idea of visibility is something that Google has shown interest in with Google Play Protect.

Google Play Protect also brings to the table the ability to secure a lost or stolen device and completely wipe its internal memory.  For most device users, the idea of their personal and sensitive information finding its way into the wrong hands is worse than the prospect of simply losing an electronic device.  With Google Play Protect, it is possible to detect the last known location of your device and lock it with a PIN, password or pattern as per your preference.

If you feel necessary, you can take the nuclear option and wipe the internal memory of your lost device entirely.

For the most part, that’s all there is to know about Google Play Protect and its key functionalities.  Just as soon as it is activated, it gets everything done on its own and doesn’t need any kind of involvement or intervention.  All you really need to do is ensure that it is active in the first place.

Kiruthika Ramesh is a blogger, internet marketer, social media enthusiast, business consultant and the Content Writer of Free Android Root. She has over 2 years of experience in dealing with various issues related to Android. She is actively working towards educating people on Technology Tips and steps to mitigate them.